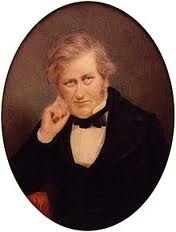 À BECKETT, GILBERT ABBOTT (1811-1856), English writer, was born in north London on the 9th of January 1811.  He belonged to a family claiming descent from the father of St Thomas Becket.  His elder brother, Sir William a Beckett (1806-1869), became chief justice of Victoria (Australia).  Gilbert Abbott a Beckett was educated at Westminster school, and was called to the bar at Gray’s Inn in 1841.  He edited Figaro in London, and was one of the original staff of Punch and a contributor all his life.  He was an active journalist on The Times and The Morning Herald, contributed a series of light articles to The Illustrated London News, conducted in 1846 The Almanack of the Month and found time to produce some fifty or sixty plays, among them dramatized versions of Dickens’s shorter stories in collaboration with Mark Lemon.  As poor-law commissioner he presented a valuable report to the home secretary regarding scandals in connection with the Andover Union, and in 1849 he became a metropolitan police magistrate.  He died at Boulogne on the 30th of August 1856 of typhus fever.

His eldest son GILBERT ARTHUR A BECKETT (1837-1891) was born at Hammersmith on the 7th of April 1837.  He went up to Christ Church, Oxford, as a Westminster scholar in 1855, graduating in 1860.  He was entered at Lincoln’s Inn, but gave his attention chiefly to the drama, producing Diamonds and Hearts at the Haymarket in 1867, which was followed by other light comedies.  His pieces include numerous burlesques and pantomimes, the libretti of Savonarola (Hamburg, 1884) and of The Canterbury Pilgrims (Drury Lane, 1884) for the music of Dr (afterwards Sir) C. V. Stanford. The Happy Land (Court Theatre, 1873), a political burlesque of W. S. Gilbert’s Wicked World, was written in collaboration with F. L. Tomline.  For the last ten years of his life he was on the regular staff of Punch. His health was seriously affected in 1889 by the death of his only son, and he died on the 15th of October 1891.