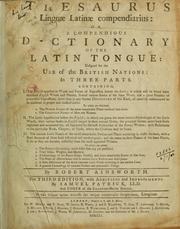 AINSWORTH, ROBERT (1660-1743), English schoolmaster and author, was born at Eccles, near Manchester, in September 1660.  After teaching for some time at Lever’s Grammar School in Bolton, he removed to London, where he conducted a boarding-school, first at Bethnal Green and then at Hackney.  He soon made a moderate fortune which gave him leisure to pursue his classical studies.  Ainsworth’s name is associated with his Latin-English Dictionary, begun in 1714, and published in 1736 as Thesaurus linguae Latinae compendiarius. It was long extensively used in schools, and often reprinted, the later editions being revised and enlarged by other hands, but it is now superseded.  Ainsworth was also the author of some useful works on classical antiquities, and a sensible treatise on education, entitled The most Natural and Easy Way of Institution (1698), in which he advocates the teaching of Latin by conversational methods and deprecates punishment of any sort.  He died in London on the 4th of April 1743.