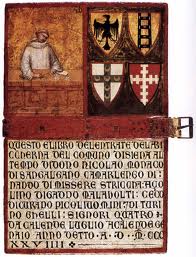 The famous Hincmar, Archbishop of Rheims, in a circular letter which he wrote to the bishops, his suffragans, and the faithful of his diocese, relates, that a man named Bertholdus (or Bertholdas), with whom he was acquainted, having fallen ill, and received all the sacraments, remained during four days without taking any food. On the fourth day he was so weak that there was hardly a feeble palpitation and respiration found in him. About midnight he called to his wife, and told her to send quickly for his confessor.

The priest was as yet only in the court before the house, when Bertholdus said, "Place a seat here, for the priest is coming." He entered the room and said some prayers, to which Bertholdus uttered the responses, and then related to him the vision he had had. "On leaving this world," said he, "I saw forty-one bishops, amongst whom were Ebonius, Leopardellus, Eneas, who were clothed in coarse black garments, dirty, and singed by the flames. As for themselves, they were sometimes burned by the flames, and at others frozen with insupportable cold." Ebonius said to him, "Go to my clergy and my friends, and tell them to offer for us the holy sacrifice." Bertholdus obeyed, and returning to the place where he had seen the bishops, he found them well clothed, shaved, bathed, and rejoicing.

A little farther on, he met King Charles, who was as if eaten by worms. This prince begged him to go and tell Hincmar to relieve his misery. Hincmar said mass for him, and King Charles found relief. After that he saw Bishop Jessé, of Orleans, who was over a well, and four demons plunged him into boiling pitch, and then threw him into icy water. They prayed for him, and he was relieved. He then saw the Count Othaire, who was likewise in torment. Bertholdus begged the wife of Othaire, with his vassals and friends, to pray for him, and give alms, and he was delivered from his torments. Bertholdus after that received the holy communion, and began to find himself better, with the hope of living fourteen years longer, as he had been promised by his guide, who had shown him all that we have just related.