Booksellers and Printers, Old and New

[This is taken from Eugene Field's The Love Affairs of a Bibliomaniac.] 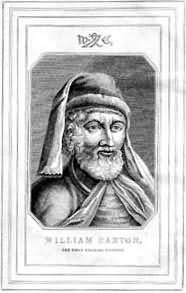 Judge Methuen tells me that he fears what I have said about my bookseller will create the impression that I am unkindly disposed toward the bookselling craft. For the last fifty years I have had uninterrupted dealings with booksellers, and none knows better than the booksellers themselves that I particularly admire them as a class. Visitors to my home have noticed that upon my walls are hung noble portraits of Caxton, Wynkin de Worde, Richard Pynson, John Wygthe, Rayne Wolfe, John Daye, Jacob Tonson, Richard Johnes, John Dunton, and other famous old printers and booksellers.

I have, too, a large collection of portraits of modern booksellers, including a pen-and- ink sketch of Quaritch, a line engraving of Rimell, and a very excellent etching of my dear friend, the late Henry Stevens. One of the portraits is a unique, for I had it painted myself, and I have never permitted any copy to be made of it; it is of my bookseller, and it represents him in the garb of a fisherman, holding his rod and reel in one hand and the copy of the "Compleat Angler" in the other.

Mr. Curwen speaks of booksellers as being "singularly thrifty, able, industrious, and persevering---in some few cases singularly venturesome, liberal, and kind-hearted." My own observation and experience have taught me that as a class booksellers are exceptionally intelligent, ranking with printers in respect to the variety and extent of their learning.

They have, however, this distinct advantage over the printers---they are not brought in contact with the manifold temptations to intemperance and profligacy which environ the votaries of the art preservative of arts. Horace Smith has said that "were there no readers there certainly would be no writers; clearly, therefore, the existence of writers depends upon the existence of readers: and, of course, since the cause must be antecedent to the effect, readers existed before writers. Yet, on the other hand, if there were no writers there could be no readers; so it would appear that writers must be antecedent to readers."

The further we proceed with the investigation the more satisfied we become that the original man was three of number, one of him being the bookseller, who established friendly relations between the other two of him, saying: "I will serve you both by inciting both a demand and a supply." So then the author did his part, and the reader his, which I take to be a much more dignified scheme than that suggested by Darwin and his school of investigators.

By the very nature of their occupation booksellers are broad-minded; their association with every class of humanity and their constant companionship with books give them a liberality that enables them to view with singular clearness and dispassionateness every phase of life and every dispensation of Providence. They are not always practical, for the development of the spiritual and intellectual natures in man does not at the same time promote dexterity in the use of the baser organs of the body, I have known philosophers who could not harness a horse or even shoo chickens.

Ralph Waldo Emerson once consumed several hours' time trying to determine whether he should trundle a wheelbarrow by pushing it or by pulling it. A. Bronson Alcott once tried to construct a chicken coop, and he had boarded himself up inside the structure before he discovered that he had not provided for a door or for windows. We have all heard the story of Isaac Newton---how he cut two holes in his study-door, a large one for his cat to enter by, and a small one for the kitten.

This unworldliness---this impossibility, if you please---is characteristic of intellectual progression. Judge Methuen's second son is named Grolier; and the fact that he doesn't know enough to come in out of the rain has inspired both the Judge and myself with the conviction that in due time Grolier will become a great philosopher.

The mention of this revered name reminds me that my bookseller told me the other day that just before I entered his shop a wealthy patron of the arts and muses called with a volume which he wished to have rebound.

"I can send it to Paris or to London," said my bookseller. "If you have no choice of binder, I will entrust it to Zaehnsdorf with instructions to lavish his choicest art upon it."

"But indeed I have a choice," cried the plutocrat, proudly. "I noticed a large number of Grolier bindings at the Art Institute last week, and I want something of the same kind myself. Send the book to Grolier, and tell him to do his prettiest by it, for I can stand the expense, no matter what it is."

Somewhere in his admirable discourse old Walton has stated the theory that an angler must be born and then made. I have always held the same to be true of the bookseller. There are many, too many, charlatans in the trade; the simon-pure bookseller enters upon and conducts bookselling not merely as a trade and for the purpose of amassing riches, but because he loves books and because he has pleasure in diffusing their gracious influences.

Judge Methuen tells me that it is no longer the fashion to refer to persons or things as being "simon-pure"; the fashion, as he says, passed out some years ago when a writer in a German paper "was led into an amusing blunder by an English review. The reviewer, having occasion to draw a distinction between George and Robert Cruikshank, spoke of the former as the real Simon Pure. The German, not understanding the allusion, gravely told his readers that George Cruikshank was a pseudonym, the author's real name being Simon Pure."

This incident is given in Henry B. Wheatley's "Literary Blunders," a very charming book, but one that could have been made more interesting to me had it recorded the curious blunder which Frederick Saunders makes in his "Story of Some Famous Books." On page 169 we find this information: "Among earlier American bards we instance Dana, whose imaginative poem 'The Culprit Fay,' so replete with poetic beauty, is a fairy tale of the highlands of the Hudson. The origin of the poem is traced to a conversation with Cooper, the novelist, and Fitz-Greene Halleck, the poet, who, speaking of the Scottish streams and their legendary associations, insisted that the American rivers were not susceptible of like poetic treatment. Dana thought otherwise, and to make his position good produced three days after this poem."

It may be that Saunders wrote the name Drake, for it was James Rodman Drake who did "The Culprit Fay." Perhaps it was the printer's fault that the poem is accredited to Dana. Perhaps Mr. Saunders writes so legible a hand that the printers are careless with his manuscript.

"There is," says Wheatley, "there is a popular notion among authors that it is not wise to write a clear hand. Menage was one of the first to express it. He wrote: 'If you desire that no mistake shall appear in the works which you publish, never send well-written copy to the printer, for in that case the manuscript is given to young apprentices, who make a thousand errors; while, on the other hand, that which is difficult to read is dealt with by the master- printers.'"

Far be it from the book-lover and the book-collector to rail at blunders, for not unfrequently these very blunders make books valuable. Who cares for a Pine's Horace that does not contain the "potest" error? The genuine first edition of Hawthorne's "Scarlet Letter" is to be determined by the presence of a certain typographical slip in the introduction. The first edition of the English Scriptures printed in Ireland (1716) is much desired by collectors, and simply because of an error. Isaiah bids us "sin no more," but the Belfast printer, by some means or another, transposed the letters in such wise as to make the injunction read "sin on more."

The so-called Wicked Bible is a book that is seldom met with, and, therefore, in great demand. It was printed in the time of Charles I., and it is notorious because it omits the adverb "not" in its version of the seventh commandment; the printers were fined a large sum for this gross error. Six copies of the Wicked Bible are known to be in existence. At one time the late James Lenox had two copies; in his interesting memoirs Henry Stevens tells how he picked up one copy in Paris for fifty guineas.

Rabelais' printer got the satirical doctor into deep water for printing asne for ame; the council of the Sorbonne took the matter up and asked Francis I. to prosecute Rabelais for heresy; this the king declined to do, and Rabelais proceeded forthwith to torment the council for having founded a charge of heresy upon a printer's blunder.

Once upon a time the Foulis printing establishment at Glasgow determined to print a perfect Horace; accordingly the proof sheets were hung up at the gates of the university, and a sum of money was paid for every error detected.

Notwithstanding these precautions the edition had six uncorrected errors in it when it was finally published. Disraeli says that the so-called Pearl Bible had six thousand errata! The works of Picus of Mirandula, Strasburg, 1507, gave a list of errata covering fifteen folio pages, and a worse case is that of "Missae ac Missalis Anatomia" (1561), a volume of one hundred and seventy-two pages, fifteen of which are devoted to the errata. The author of the Missae felt so deeply aggrieved by this array of blunders that he made a public explanation to the effect that the devil himself stole the manuscript, tampered with it, and then actually compelled the printer to misread it.

I am not sure that this ingenious explanation did not give origin to the term of "printer's devil."

It is frightful to think
What nonsense sometimes
They make of one's sense
And, what's worse, of one's rhymes.

In my ode upon spring,
Which I meant to have made
A most beautiful thing,

We can fancy Richard Porson's rage (for Porson was of violent temper) when, having written the statement that "the crowd rent the air with their shouts," his printer made the line read "the crowd rent the air with their snouts." However, this error was a natural one, since it occurs in the "Catechism of the Swinish Multitude." Royalty only are privileged when it comes to the matter of blundering. When Louis XIV was a boy he one day spoke of "un carosse"; he should have said "une carosse," but he was king, and having changed the gender of carosse the change was accepted, and unto this day carosse is masculine.

That errors should occur in newspapers is not remarkable, for much of the work in a newspaper office is done hastily. Yet some of these errors are very amusing. I remember to have read in a Berlin newspaper a number of years ago that "Prince Bismarck is trying to keep up honest and straightforward relations with all the girls" (madchen).

This statement seemed incomprehensible until it transpired that the word "madchen" was in this instance a misprint for "machten," a word meaning all the European powers.