Application of such Instances to Vampires 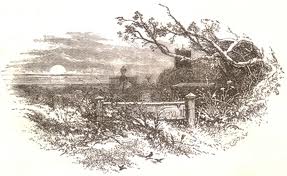 Supposing these facts, which I believe to be incontestably true, may we not imagine that the vampires of Hungary, Silesia, and Moldavia, are some of those men who have died of maladies which heat the blood, and who have retained some remains of life in their graves, much like those animals which we have mentioned, and those birds which plunge themselves during the winter in the lakes and marshes of Poland, and in the northern countries? They are without respiration or motion, but still not destitute of vitality. They resume their motion and activity when, on the return of spring, the sun warms the waters, or when they are brought near a moderate fire, or laid in a room of temperate heat; then they are seen to revive, and perform their ordinary functions, which had been suspended by the cold.

Thus, vampires in their graves returned to life after a certain time, and their soul does not forsake them absolutely until after the entire dissolution of their body, and when the organs of life, being absolutely broken, corrupted, and deranged, they can no longer by their agency perform any vital functions. Whence it happens, that the people of those countries impale them, cut off their heads, burn them, to deprive their spirit of all hope of animating them again, and of making use of them to molest the living.

Pliny, mentioning the soul of Hermotimes, of Lazomene, which absented itself from his body, and recounted various things that had been done afar off, which the spirit said it had seen, and which, in fact, could only be known to a person who had been present at them, says that the enemies of Hermotimes, named Cantandes, burned that body, which gave hardly any sign of life, and thus deprived the soul of the means of returning to lodge in its envelop; "donec cremato corpore interim semianimi, remeanti animæ vetut vaginam ademerint."

Origen had doubtless derived from the ancients what he teaches, that the souls which are of a spiritual nature take, on leaving their earthly body, another, more subtle, of a similar form to the grosser one they have just quitted, which serves them as a kind of sheath, or case, and that it is invested with this subtle body that they sometimes appear about their graves. He founds this opinion on what is said of Lazarus and the rich man in the Gospel, who both of them have bodies, since they speak and see, and the wicked rich man asks for a drop of water to cool his tongue.

I do not defend this reasoning of Origen; but what he says of a subtle body, which has the form of the earthly one which clothed the soul before death, quite resembles the opinion of which we spoke in Chapter IV.

That bodies which have died of violent maladies, or which have been executed when full of health, or have simply swooned, should vegetate underground in their graves; that their beards, hair, and nails should grow; that they should emit blood, be supple and pliant; that they should have no bad smell, &c.—all these things do not embarrass us: the vegetation of the human body may produce all these effects. That they should even eat and devour what is about them, the madness with which a man interred alive must be transported when he awakes from his torpor, or his swoon, must naturally lead him to these violent excesses. But the grand difficulty is to explain how the vampires come out of their graves to haunt the living, and how they return to them again. For all the accounts that we see suppose the thing as certain, without informing us either of the way or the circumstances, which would, however, be the most interesting part of the narrative.

How a body covered with four or five feet of earth, having no room to move about and disengage itself, wrapped up in linen, covered with pitch, can make its way out, and come back upon the earth, and there occasion such effects as are related of it; and how after that it returns to its former state, and re-enters underground, where it is found sound, whole, and full of blood, and in the same condition as a living body? Will it be said that these bodies evaporate through the ground without opening it, like the water and vapors which enter into the earth, or proceed from it, without sensibly deranging its particles? It were to be wished that the accounts which have been given us concerning the return of the vampires had been more minute in their explanations of this subject.

Supposing that their bodies do not stir from their graves, that it is only their phantoms which appear to the living, what cause produces and animates these phantoms? Can it be the spirit of the defunct, which has not yet forsaken them, or some demon, which makes their apparition in a fantastic and borrowed body? And if these bodies are merely phantomlike, how can they suck the blood of living people? We always find ourselves in a difficulty to know if these appearances are natural or miraculous.

A sensible priest related to me, a little while ago, that, traveling in Moravia, he was invited by M. Jeanin, a canon of the cathedral at Olmutz, to accompany him to their village, called Liebava, where he had been appointed commissioner by the consistory of the bishopric, to take information concerning the fact of a certain famous vampire, which had caused much confusion in this village of Liebava some years before.

The case proceeded. They heard the witnesses, they observed the usual forms of the law. The witnesses deposed that a certain notable inhabitant of Liebava had often disturbed the living in their beds at night, that he had come out of the cemetery, and had appeared in several houses three or four years ago; that his troublesome visits had ceased because a Hungarian stranger, passing through the village at the time of these reports, had boasted that he could put an end to them, and make the vampire disappear. To perform his promise, he mounted on the church steeple, and observed the moment when the vampire came out of his grave, leaving near it the linen clothes in which he had been enveloped, and then went to disturb the inhabitants of the village.

The Hungarian, having seen him come out of his grave, went down quickly from the steeple, took up the linen envelops of the vampire, and carried them with him up the tower. The vampire having returned from his prowlings, cried loudly against the Hungarian, who made him a sign from the top of the tower that if he wished to have his clothes again he must fetch them; the vampire began to ascend the steeple, but the Hungarian threw him down backwards from the ladder, and cut his head off with a spade. Such was the end of this tragedy.

The person who related this story to me saw nothing, neither did the noble who had been sent as commissioner; they only heard the report of the peasants of the place, people extremely ignorant, superstitious and credulous, and most exceedingly prejudiced on the subject of vampirism.

But supposing that there be any reality in the fact of these apparitions of vampires, shall they be attributed to God, to angels, to the spirits of these ghosts, or to the devil? In this last case, will it be said that the devil will utilize these bodies, and give them power to penetrate through the ground without disturbing, to glide through the cracks and joints of a door, to pass through a keyhole, to lengthen or shorten themselves, to reduce themselves to the nature of air, or water, to evaporate through the ground—in short, to put them in the same state in which we believe the bodies of the blessed will be after the resurrection, and in which was that of our Savior after his resurrection, who showed himself only to those whom he thought proper, and who without opening the doors, appeared suddenly in the midst of his disciples.

But should it be allowed that the demon could reanimate these bodies, and give them the power of motion for a time, could he also lengthen, diminish, rarefy, subtilize the bodies of these ghosts, and give them the faculty of penetrating through the ground, the doors and windows? There is no appearance of his having received this power from God, and we cannot even conceive that an earthly body, material and gross, can be reduced to that state of subtlety and spiritualization without destroying the configuration of its parts and spoiling the economy of its structure; which would be contrary to the intention of the demon, and render this body incapable of appearing, showing itself, acting and speaking, and, in short, of being cut to pieces and burned, as is commonly seen and practiced in Moravia, Poland, and Silesia. These difficulties exist in regard to those persons of whom we have made mention, who, being excommunicated, rose from their tombs, and left the church in sight of everybody.

We must then keep silence on this article, since it has not pleased God to reveal to us either the extent of the demon's power, or the way in which these things can be done. There is even much appearance of illusion; and even if some reality were mixed up with it, we may easily console ourselves for our ignorance in that respect, since there are so many natural things which take place within us and around us, of which the cause and manner are unknown to us.

©  D J McAdam.  Please note: all applicable material on this website is protected by law and may not be copied without express written permission.