The Ruins near Lake Titicaca 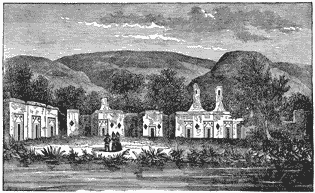 It is now agreed that the Peruvian antiquities represent two distinct periods in the ancient history of the country, one being much older than the other. Mr. Prescott accepts and repeats the opinion that “there existed in the country a race advanced in civilization before the time of the Incas,” and that the ruins on the shores of Lake Titicaca are older than the reign of the first Inca. In the work of Rivero and Von Tschudi, it is stated that a critical examination of the monuments “indicates two very different epochs in Peruvian art, at least so far as concerns architecture; one before and the other after the arrival of the first Inca.” Among the ruins which belong to the older civilization are those at Lake Titicaca, old Huanuco, Tiahuanaco, and Gran-Chimu, and it probably originated the roads and aqueducts. At Cuzco and other places are remains of buildings which represent the later time; but Cuzco of the Incas appears to have occupied the site of a ruined city of the older period. Montesinos supposes the name of Cuzco was derived from cosca, a Peruvian word signifying to level, or from heaps of earth called coscos, which abounded there. In his account of the previous times there is mention that an old city built there was in ruins. Perhaps the first Inca found on its site nothing but coscos, or heaps of ruins.

At Lake Titicaca some of the more important remains are on the islands. On Titicaca Island are the ruins of a great edifice described as “a palace or temple.” Remains of other structures exist, but their ruins are old, much older than the time of the Incas.  They were all built of hewn stone, and had doors and windows, with posts, sills, and thresholds of stone, the doorways being narrower above than below. On the island of Coati there are remarkable ruins. The largest building here is also described as “a palace or temple,” although it may have been something else. It was not high, but very large in extent. It stood around three sides of a parallelogram, with some peculiarities of construction connected with the ends or wings. Making allowance for the absence of the pyramidal foundations, it has more resemblance to some of the great constructions in Central America than to any thing peculiar to the later period of Peruvian architecture.

A few miles from Lake Titicaca, at Tiahuanaco, are ruins which were very imposing when first seen by the Spaniards in the time of Pizarro. It is usual to speak of them as the oldest ruins in Peru, which may or may not be correct. They must, however, be classed with those at the lake. Not much now remains of the edifices, which were in a very ruinous condition three hundred and forty years ago. They were described by Cieça de Leon, who accompanied Pizarro, and also by Diego d’Alcobaça. Cieça de Leon mentions “great edifices” that were in ruins, “an artificial hill raised on a groundwork of stone,” and “two stone idols resembling the human figure, and apparently made by skillful artificers.” These “idols” were great statues, ten or twelve feet high. One of them, which was carried to La Paz in 1842, measured “three and a half yards” in length. Sculptured decorations appear on them, and, according to Cieça de Leon, the figures seemed to be “clothed in long vestments” different from those worn in the time of the Incas. Of a very remarkable edifice, whose foundations could be traced near these statues, nothing remained then “but a well-built wall, which must have been there for ages, the stones being very much worn and crumbled.” Cieça de Leon’s description goes on as follows:

“In this place, also, there are stones so large and so overgrown that our wonder is incited, it being incomprehensible how the power of man could have placed them where we see them. They are variously wrought, and some of them, having the form of men, must have been idols. Near the walls are many caves and excavations under the earth, but in another place, farther west, are other and greater monuments, such as large gateways with hinges, platforms, and porches, each made of a single stone. It surprised me to see these enormous gateways made of great masses of stone, some of which were thirty feet long, fifteen high, and six thick.”

Many of the stone monuments at Tiahuanaco have been removed, some for building, some for other purposes. In one case, “large masses of sculptured stone ten yards in length and six in width” were used to make grinding stones for a chocolate mill. The principal monuments now seen on this field of ruins are a vast mound covering several acres, where there seems to have been a great edifice, fragments of columns, erect slabs of stone which formed parts of buildings, and several of the monolithic gateways, the largest of which was made of a single stone ten feet high and thirteen broad.

At Cuzco, two or more degrees north of Lake Titicaca, there are ruins of buildings that were occupied until the rule of the Incas was overthrown. Remains of the old structures are seen in various parts of the present town, some of them incorporated into new edifices built by the Spaniards. Cyclopean remains of walls of the Temple of the Sun now constitute a portion of the Convent of St. Domingo. In the days of the Incas, this temple stood “a circuit of more than four hundred paces,” and was surrounded by a great wall built of cut stone. Remains of the old fortifications are seen; and there is an extensive ruin here which shows what is supposed to be all that remains of the palace of the Incas. Occasionally there is search at Cuzco, by means of excavation, for antiquities. Within a few years an important discovery has been made; a lunar calendar of the Incas, made of gold, has been exhumed. At first it was described as “a gold breastplate or sun;” but William Bollaert, who gives an account of it, finds that it is a calendar, the first discovered in Peru. Many others, probably, went to the melting-pot at the time of the Conquest. This is not quite circular. The outer ring is five inches and three tenths in diameter, and the inner four inches. It was made to be fastened to the breast of an Inca or priest. The figures were stamped on it, and there “seem to be twenty-four compartments, large and small, including three at the top. At the bottom are two spaces; figures may or may not have been there, but it looks as if they had been worn away.” It was found about the year 1859.

The uniform and constant report of Peruvian tradition places the beginning of this old civilization in the Valley of Cuzco, near Lake Titicaca. There appeared the first civilizers and the first civilized communities. This beautiful valley is the most elevated table-land on the continent, Lake Titicaca being 12,846 feet above the sea level. Were it not within the tropics, it would be a region of eternal snow, for it is more than 4000 feet higher than the beginning of perpetual snow on Mont Blanc. Near it are some of the higher peaks of the Andes, among them Sorato, Illimani, and Sahama.