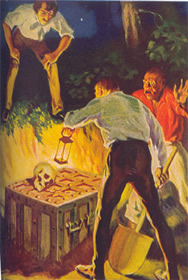 A web message from 1996 identifies Louis Grell as a Professor of Art at the University of Chicago in the 1920's, who was associated with United Studios in Chicago.  The message goes on to say that three of Grell's murals were recently uncovered in a Pennsylvania theater.  It does not state the theater or town, but other information leads us to believe that this would be the Palace Theatre in Greensburg, Pennsylvania, built in 1926.

A different source identifies Grell as an instructor at the Chicago Institute of Fine Arts, and that he was a noted muralist.  An auction site, offering one of Grell's portraits, gives his birth year as 1887 and death year as 1960.

We also find reference to Grell being an instructor of Jose Perez at the "Chicago Academy."

We are quite certain that Louis Grell provided illustrations for the multi-volume Journeys Through Bookland, published by the Bellows-Reeve Company of Chicago from 1909 to 1939.  In Volume Nine (New Edition), Grell has provided four illustrations for Edgar Allan Poe's The Gold Bug.  Three are monotone, and the fourth, shown here, is a color plate.  Image size has been reduced.

Grell provided illustrations for other volumes of Journeys Through Bookland as well; we can confirm that his illustrations also appear in Volume Three and Volume Four.

Other books including Louis Grell illustrations (we'll add to this as we get additional information):