The Seven Cities of Cibola 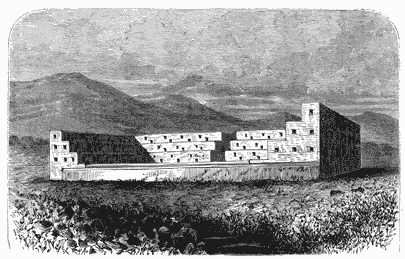 In the New Mexican valley of the Chaco, one degree or more north of Zuni, are ruins of what some suppose to have been the famous “Seven Cities of Cibola.” In 1540, Spanish cupidity having been strongly incited by tales of the greatness and vast wealth of Cibola, Coronado, then governor of New Galicia, set out with an army to conquer and rob its cities. The report in which he tells the story of this conquest and of his disappointment is still in existence. The Cevolans defended themselves with arrows and spears, and hurled stones upon his army from the tops of their buildings. But resistance was of no avail; Cibola was conquered by Coronado, and immediately deserted by all its inhabitants who escaped death. The conquering buccaneer, however, did not find the treasures of gold and silver he expected. Three hundred and thirty years or more have passed away since this expedition of the Spanish marauders was undertaken, but the “Seven Cities of Cibola” (if they really were the “cities” whose remains are found in the Chaco Valley), although much dilapidated, are still sufficiently well preserved to show us what they were.

There are seven ruins in the Chaco Valley, all of the same age, from one to three miles apart, the whole line along which they are situated being not more than ten miles in extent. Coronado said of Cibola, “The seven cities are seven small towns, standing all within four leagues together;” and “all together they are called Cibola.” The Chaco ruins show that each of these “cities” was, Pueblo fashion, a single edifice of vast size, capable of accommodating from five hundred to three thousand people. They were all built of stone, around three sides of a square, the side opposite the main building being left open. The outer faces of the walls were constructed with thin and regular blocks of sandstone; the inner surfaces were made of cobblestone laid in mortar, and the outer walls were three feet thick. They were four or five stories high, and the only entrances to them were “window openings” in the second story. Above the cañon inclosing the valley containing these ruins, at a distance of thirteen miles, are the remains of another “city” of precisely the same kind. Its walls are at present between twenty and thirty feet high, their foundations being deeply sunk into the earth. Lieutenant Simpson, who explored that region in 1849, says it was built of tabular pieces of hard, fine-grained, compact gray sandstone, none of the layers being more than three inches thick. He adds, “It discovers in the masonry a combination of science and art which can only be referred to a higher stage of civilization and refinement than is discoverable in the work of Mexicans or Pueblos of the present day. Indeed, so beautifully diminutive and true are the details of the structure as to cause it at a little distance to have all the appearance of a magnificent piece of mosaic.”

Other ruins have been examined in this northern part of the old Mexican territory, and more will be brought to light, for the whole region has not been carefully examined, and new discoveries are constantly reported.