Works of the Mound-Builders 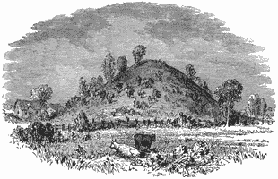 One of the most learned writers on American antiquities, a Frenchman, speaking of discoveries in Peru, exclaims, “America is to be again discovered! We must remove the veil in which Spanish politics has sought to bury its ancient civilization!” In this case, quite as much is due to the ignorance, indifference, unscrupulous greed, and religious fanaticism of the Spaniards, as to Spanish politics. The gold-hunting marauders who subjugated Mexico and Peru could be robbers and destroyers, but they were not qualified in any respect to become intelligent students of American antiquity. What a select company of investigators, such as could be organized in our time, might have done in Mexico and Central America, for instance, three hundred and fifty years ago, is easily understood. In what they did, and in what they failed to do, the Spaniards who went there acted in strict accordance with such character as they had; and yet we are not wholly without obligation to some of the more intelligent Spaniards connected with the Conquest.

There are existing monuments of an American ancient history which invite study, and most of which might, doubtless, have been studied more successfully in the first part of the sixteenth century, before nearly all the old books of Central America had been destroyed by Spanish fanaticism, than at present. Remains of ancient civilizations, differing to some extent in degree and character, are found in three great sections of the American continent: the west side of South America, between Chili and the first or second degree of north latitude; Central America and Mexico; and the valleys of the Mississippi and the Ohio. These regions have all been explored to some extent—not completely, but sufficiently to show the significance and importance of their archeological remains, most of which were already mysterious antiquities when the continent was discovered by Columbus. I propose to give some account of these antiquities, not for the edification of those already learned in American archeology, but for general readers who have not made the subject a study. My sketches will begin with the Mississippi Valley and the regions connected with it.

An ancient and unknown people left remains of settled life, and of a certain degree of civilization, in the valleys of the Mississippi and its tributaries. We have no authentic name for them either as a nation or a race; therefore they are called “Mound-Builders,” this name having been suggested by an important class of their works.

Prominent among the remains by which we know that such a people once inhabited that region are artificial mounds constructed with intelligence and great labor. Most of them are terraced and truncated pyramids. In shape they are usually square or rectangular, but sometimes hexagonal or octagonal, and the higher mounds appear to have been constructed with winding stairways on the outside leading to their summits. Many of these structures have a close resemblance to the teocallis of Mexico. They differ considerably in size. The great mound at Grave Creek, West Virginia, is 70 feet high and 1000 feet in circumference at the base. A mound in Miamisburg, Ohio, is 68 feet high and 852 feet in circumference. The great truncated pyramid at Cahokia, Illinois, is 700 feet long, 500 wide, and 90 in height. Generally, however, these mounds range from 6 to 30 feet high. In the lower valley of the Mississippi they are usually larger in horizontal extent, with less elevation.

There have been a great many conjectures in regard to the purposes for which these mounds were built, some of them rather fanciful. I find it most reasonable to believe that the mounds in this part of the continent were used precisely as similar structures were used in Mexico and Central America. The lower mounds, or most of them, must have been constructed as foundations of the more important edifices of the mound-building people. Many of the great buildings erected on such pyramidal foundations, at Palenque, Uxmal, and elsewhere in that region, have not disappeared, because they were built of hewn stone laid in mortar. For reasons not difficult to understand, the Mound-Builders, beginning their works on the lower Mississippi, constructed such edifices of wood or some other perishable material; therefore not a trace of them remains. The higher mounds, with broad, flat summits, reached by flights of steps on the outside, are like the Mexican teocallis, or temples. In Mexico and Central America these structures were very numerous. They are described as solid pyramidal masses of earth, cased with brick or stone, level at the top, and furnished with ascending ranges of steps on the outside. The resemblance is striking, and the most reasonable explanation seems to be that in both regions mounds of this class were intended for the same uses.

Another class of these antiquities consists of enclosures formed by heavy embankments of earth and stone. There is nothing to explain these constructions so clearly as to leave no room for conjecture and speculation. It has been suggested that some of them may have been intended for defense, others for religious purposes. A portion of them, it may be, encircled villages or towns. In some cases the ditches or fosses were on the inside, in others on the outside. But no one can fully explain why they were made. We know only that they were prepared intelligently, with great labor, for human uses. “Lines of embankment varying from 5 to 30 feet in height, and inclosing from 1 to 50 acres, are very common, while enclosures containing from 100 to 200 acres are not infrequent, and occasional works are found inclosing as many as 400 acres.” Combinations of the square and circle are common in these ancient works, and the figures are always perfect. This perfection of the figures proves, as Squier and Davis remark, that “the builders possessed a standard of measurement, and had a means of determining angles.”

About 100 enclosures and 500 mounds have been examined in Ross County, Ohio. The number of mounds in the whole state is estimated at over 10,000, and the number of enclosures at more than 1500. The great number of these ancient remains in the regions occupied by the Mound-Builders is really surprising. They are more numerous in the regions on the lower Mississippi and the Gulf of Mexico than any where else; and here, in some cases, sun-dried brick was used in the embankments.

One peculiarity at the South is, that while the enclosures are generally smaller and comparatively less numerous, there is a greater proportion of low mounds, and these are often larger in extent. Harrison Mound, in South Carolina, is 480 feet in circumference and 15 feet high. Another is described as 500 feet in circumference at the base, 225 at the summit, and 34 feet high. In a small mound near this, which was opened, there was found “an urn holding 46 quarts,” and also a considerable deposit of beads and shell ornaments very much decomposed. Broad terraces of various heights, mounds with several stages, elevated passages, and long avenues, and aguadas or artificial ponds, are common at the South.

At Seltzertown, Mississippi, there is a mound 600 feet long, 400 wide, and 40 feet high. The area of its level summit measures 4 acres. There was a ditch around it, and near it are smaller mounds. Mr. J. R. Bartlett says, on the authority of Dr. M. W. Dickeson, “The north side of this mound is supported by a wall of sun-dried brick two feet thick, filled with grass, rushes, and leaves.” Dr. Dickeson mentions angular tumuli, with corners “still quite perfect,” and “formed of large bricks bearing the impression of human hands.” In Louisiana, near the Trinity, there is a great enclosure partially faced with sun-dried bricks of large size; and in this neighborhood ditches and artificial ponds have been examined. In the Southern States these works appear to assume a closer resemblance to the mound work of Central America.

The result of intelligent exploration and study of these antiquities is stated as follows: “Although possessing throughout certain general points of resemblance going to establish a kindred origin, these works nevertheless resolve themselves into three grand geographical divisions, which present in many respects striking contrasts, yet so gradually merge into each other that it is impossible to determine where one series terminates and another begins.” On the upper lakes, and to a certain extent in Michigan, Iowa, and Missouri, but particularly in Wisconsin, the outlines of the enclosures (elsewhere more regular in form) were designed in the forms of animals, birds, serpents, and even men, appearing on the surface of the country like huge relievos. The embankment of an irregular enclosure in Adams County, Ohio, is described as follows by Squier and Davis, Mr. Squier having made the drawing of it for the work published by the Smithsonian Institution:

“It is in the form of a serpent, upward of 1000 feet in length, extended in graceful curves, and terminating in a triple coil at the tail. The embankment constituting this figure is more than 5 feet high, with a base 30 feet wide at the centre of the body, diminishing somewhat toward the head and tail. The neck of the figure is stretched out and slightly curved. The mouth is wide open, and seems in the act of swallowing or ejecting an oval figure which rests partly within the distended jaws. This oval is formed by an embankment 4 feet high, and is perfectly regular in outline, its transverse and conjugate diameters being respectively 160 and 80 feet. The combined figure has been regarded as a symbolical illustration of the Oriental cosmological idea of the serpent and the egg; but, however this may be, little doubt can exist of the symbolical character of the monument.” 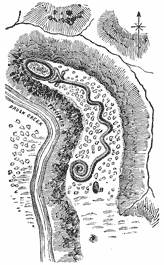 No symbolic device is more common among the antiquities of Mexico and Central America than the form of the serpent, and it was sometimes reproduced in part in architectural constructions. One of the old books, giving account of a temple dedicated to Quetzalcohuatl, says, “It was circular in form, and the entrance represented the mouth of a serpent, opened in a frightful manner, and extremely terrifying to those who approached it for the first time.”

On the Ohio and its tributaries, and farther south, where the mounds are numerous, the enclosures have more regular forms; and in the Ohio Valley very often their great extent has incited speculation. At Newark, Ohio, when first discovered, they were spread over an area more than two miles square, and still showed more than twelve miles of embankment from two to twenty feet high. Farther south, as already stated, the enclosures are fewer and smaller, or, to speak more exactly, the great enclosures and high mounds are much less common than low truncated pyramids, and pyramidal platforms or foundations with dependent works. Passing up the valley, it is found that Marietta, Newark, Portsmouth, Chillicothe, Circleville, Ohio; St. Louis, Missouri, and Frankfort, Kentucky, were favorite seats of the Mound-Builders. This leads one of the most intelligent investigators to remark that “the centers of population are now where they were when the mysterious race of Mound-Builders existed.” There is, however, this difference: the remains indicate that their most populous and advanced communities were at the South.

Among those who have examined and described remains of the Mound-Builders, Messrs. Squier and Davis rank first in importance, because they have done most to give a particular and comprehensive account of them. Their great work, published by the Smithsonian Institution, must be regarded as the highest authority, and those who desire to study the whole subject more in detail will find that work indispensable.