Cowboys of the Silver Screen on US Postage Stamps 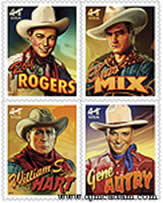 The following is excerpted from a press release by the United States Postal Service at the time of issue of the Cowboy of the Silver Screen stamps. The stamps went on sale April 17, 2010.

With the issuance of the “Cowboys of the Silver Screen” stamps, the U.S. Postal Service honors four extraordinary performers who helped make the American Western a popular form of entertainment. Film stars from the silent era through the singing era are featured on the stamps: William S. Hart, Tom Mix, Gene Autry, and Roy Rogers.

William S. Hart (1864-1946) brought a powerful presence and serious approach to early Westerns. Tall and trim, with acting skills honed by years of experience on the New York stage and in productions across the country, Hart became one of the most popular leading men of the silent film era. In his movies, the actor insisted on authentic depictions of the Old West and its people, from their clothes to their lifestyles and complex personalities. He frequently played the stalwart, tough-as-nails cowboy, and his favorite horse was a brown and white pinto named Fritz.

The stamp art for all stamps is by freelance illustrator Robert Rodriguez. Rodriguez based his portrait of William S. Hart on a likeness of the actor that appeared on a poster for the epic film Tumbleweeds (1925).

Tom Mix (1880-1940) was one of the most celebrated Western film stars of the 1920s. He wowed movie crowds and live audiences alike with his daredevil riding, expert rope handling, unerring marksmanship, and rugged good looks. He also served as a role model for a generation of schoolchildren, maintaining a wholesome screen persona that involved “no cussin’ and no drinkin’” by his characters. A legend in his own time, Mix wore oversize Stetsons, fancy suits, and handmade Texas boots with engraved silver spurs. He rode “Tony, the wonder horse,” who also became an audience favorite.

Rodriguez based his portrait of Tom Mix on a likeness of the actor that appeared on the Cupid’s Round Up (1918) movie poster.

For more than two decades, Gene Autry (1907-1998) entertained movie audiences and won the hearts of millions of fans with his distinctive singing style and easygoing personality. His sorrel-colored horse, Champion, often played a major role in his films, as did frequent sidekicks Smiley Burnette and Pat Buttram. Aside from being one of the most admired cowboys to ever appear on the silver screen, Autry left behind a legacy that includes many hit records, a long-running radio show, and a successful television series.

Rodriguez based his portrait of Gene Autry on a likeness of the actor that appeared on a poster for the film Gold Mine in the Sky (1938).

Roy Rogers (1911-1998) was a silver screen cowboy who sang his way to stardom. He always played the Western hero, with a warm smile, good character, and strong values. Although he found great success in show business—beginning with his first starring role, in a 1938 film—his modest roots kept him a down-to-earth country boy that Americans couldn’t help but admire. For decades, children across the country aspired to be like him and tried to live by the Roy Rogers code of conduct, which stated that boys and girls should “be neat and clean” and “always obey their parents.”

Rodriguez based his portrait of Roy Rogers on a selection of vintage Rogers materials.