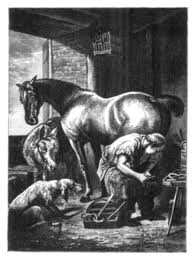 St. Augustine relates on this subject, that a countryman named Curma, who held a small place in the village of Tullia, near Hippoma, having fallen sick, remained for some days senseless and speechless, having just respiration enough left to prevent their burying him. At the end of several days he began to open his eyes, and sent to ask what they were about in the house of another peasant of the same place, and like himself named Curma. They brought him back word, that he had just expired at the very moment that he himself had recovered and was resuscitated from his deep slumber.

Then he began to talk, and related what he had seen and heard; that it was not Curma the curial, but Curma the blacksmith, who ought to have been brought; he added, that among those whom he had seen treated in different ways, he had recognized some of his deceased acquaintance, and other ecclesiastics, who were still alive, who had advised him to come to Hippoma, and be baptized by the Bishop Augustine; that according to their advice he had received baptism in his vision; that afterwards he had been introduced into Paradise, but that he had not remained there long, and that they had told him that if he wished to dwell there, he must be baptized. He replied, "I am so;" but they told him, that he had been so only in a vision, and that he must go to Hippoma to receive that sacrament in reality. He came there as soon as he was cured, and received the rite of baptism with the other catechumens.

St. Augustine was not informed of this adventure till about two years afterwards. He sent for Curma, and learnt from his own lips what I have just related. Now it is certain that Curma saw nothing with his bodily eyes of all that had been represented to him in his vision; neither the town of Hippoma, nor Bishop Augustine, nor the ecclesiastics who counseled him to be baptized, nor the persons living and deceased whom he saw and recognized. We may believe, then, that these things are effects of the power of God, who makes use of the ministry of angels to warn, console, or alarm mortals, according as his judgment sees best.

St. Augustine inquires afterwards if the dead have any knowledge of what is passing in this world? He doubts the fact, and shows that at least they have no knowledge of it by ordinary and natural means. He remarks, that it is said God took Josiah, for instance, from this world, that he might now witness the evil which was to befall his nation; and we say every day, Such-a-one is happy to have left the world, and so escaped feeling the miseries which have happened to his family or his country. But if the dead know not what is passing in this world, how can they be troubled about their bodies being interred or not? How do the saints hear our prayers? and why do we ask them for their intercession?

It is then true that the dead can learn what is passing on the earth, either by the agency of angels, or by that of the dead who arrive in the other world, or by the revelation of the Spirit of God, who discovers to them what he judges proper, and what it is expedient that they should learn. God may also sometimes send men who have long been dead to living men, as he permitted Moses and Elias to appear at the Transfiguration of the Lord, and as an infinite number of the saints have appeared to the living. The invocation of saints has always been taught and practiced in the Church; whence we may infer that they hear our prayers, are moved by our wants, and can help us by their intercession. But the way in which all that is done is not distinctly known; neither reason nor revelation furnishes us with anything certain, as to the means it pleases God to make use of to reveal our wants to them.

Lucian, in his dialogue entitled Philopseudes, or the "Lover of Falsehood," relates something similar. A man named Eucratés, having been taken down to hell, was presented to Pluto, who was angry with him who presented him, saying—"That man has not yet completed his course; his turn has not yet come. Bring hither Demilius, for the thread of his life is finished." Then they sent Eucratés back to this world, where he announced that Demilius would die soon. Demilius lived near him, and was already a little ill.

But a moment after they heard the noise of those who were bewailing his death. Lucian makes a jest of all that was said on this subject, but he owns that it was the common opinion in his time. He says in the same part of his work, that a man has been seen to come to life again after having been looked upon as dead during twenty days.

The story of Curma which we have just told, reminds me of another very like it, related by Plutarch in his Book on the Soul, of a certain man named Enarchus, who, being dead, came to life again soon after, and related that the demons who had taken away his soul were severely reprimanded by their chief, who told them that they had made a mistake, and that it was Nicander, and not Enarchus whom they ought to bring. He sent them for Nicander, who was directly seized with a fever, and died during the day. Plutarch heard this from Enarchus himself, who to confirm what he had asserted said to him—"You will get well certainly, and that very soon, of the illness which has attacked you."

St. Gregory the Great relates something very similar to what we have just mentioned. An illustrious man of rank named Stephen well known to St. Gregory and Peter his interlocutor, was accustomed to relate to him, that going to Constantinople on business he died there; and as the doctor who was to embalm him was not in town that day, they were obliged to leave the body unburied that night. During this interval Stephen was led before the judge who presided in hell, where he saw many things which he had heard of, but did not believe. When they brought him to the judge, the latter refused to receive him, saying, "It is not that man whom I commanded you to bring here, but Stephen the blacksmith." In consequence of this order the soul of the dead man was directly brought back to his body, and at the same instant Stephen the blacksmith expired; which confirmed all that the former had said of the other life.

The plague ravaging the city of Rome in the time that Narses was governor of Italy, a young Livonian, a shepherd by profession, and of a good and quiet disposition, was taken ill with the plague in the house of the advocate Valerian, his master. Just when they thought him all but dead, he suddenly came to himself, and related to them that he had been transported to heaven, where he had learnt the names of those who were to die of the plague in his master's house; having named them to him, he predicted to Valerian that he should survive him; and to convince him that he was saying the truth, he let him see that he had acquired by infusion the knowledge of several different languages; in effect he who had never known how to speak any but the Italian tongue, spoke Greek to his master, and other languages to those who knew them.

After having lived in this state for two days, he had fits of madness, and having laid hold of his hands with his teeth, he died a second time, and was followed by those whom he had named. His master, who survived, fully justified his prediction. Men and women who fall into trances remain sometimes for several days without food, respiration, or pulsation of the heart, as if they were dead. Thauler, a famous contemplative (philosopher) maintains that a man may remain entranced during a week, a month, or even a year. We have seen an abbess, who when in a trance, into which she often fell, lost the use of her natural functions, and passed thirty days in that state without taking any nourishment, and without sensation. Instances of these trances are not rare in the lives of the saints, though they are not all of the same kind, or duration.

Women in hysterical fits remain likewise many days as if dead, speechless, inert, pulseless. Galen mentions a woman who was six days in this state. Some of them pass ten whole days motionless, senseless, without respiration and without food.

Some persons who have seemed dead and motionless, had however the sense of hearing very strong, heard all that was said about themselves, made efforts to speak and show that they were not dead, but who could neither speak, nor give any signs of life.

I might here add an infinity of trances of saintly personages of both sexes, who in their delight in God, in prayer remained motionless, without sensation, almost breathless, and who felt nothing of what was done to them, or around them.

This is taken from Phantom World.