Extent of the Mound Builder's Settlements 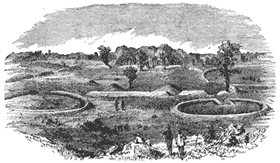 Careful study of what is shown in the many reports on these ancient remains seems plainly to authorize the conclusion that the Mound-Builders entered the country at the South, and began their settlements near the Gulf. Here they must have been very numerous, while their works at every point on the limit of their distribution, north, east, and west, indicate a much less numerous border population. Remains of their works have been traced through a great extent of country. They are found in West Virginia, and are spread through Michigan, Wisconsin, and Iowa to Nebraska. Lewis and Clarke reported seeing them on the Missouri River, a thousand miles above its junction with the Mississippi; but this report has not been satisfactorily verified. They have been observed on the Kansas, Platte, and other remote Western rivers, it is said. They are found all over the intermediate and the more southern country, being most numerous in Ohio, Indiana, Illinois, Wisconsin, Missouri, Arkansas, Kentucky, Tennessee, Louisiana, Mississippi, Alabama, Georgia, Florida, and Texas.

This ancient race seems to have occupied nearly the whole basin of the Mississippi and its tributaries, with the fertile plains along the Gulf, and their settlements were continued across the Rio Grande into Mexico; but toward their eastern, northern, and western limit the population was evidently smaller, and their occupation of the territory less complete than in the Valley of the Ohio, and from that point down to the Gulf. No other united people previous to our time can be supposed to have occupied so large an extent of territory in this part of North America.