Conclusion to Recreations of a Country Parson 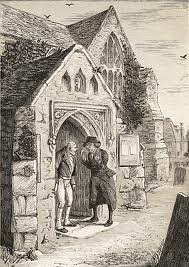 And now, friendly reader, who have borne me company so far, your task is ended. You will have no more of the RECREATIONS OF A COUNTRY PARSON. Yet do not be alarmed. I trust you have not seen the writer’s last appearance. It is only that the essays which he hopes yet to write, will not be composed in the comparative leisure of a country clergyman’s quiet life. And not merely is it still a pleasant change of occupation, to write such chapters as those you have read: but the author cannot forget that to them he is indebted for the acquaintance of some of the most valued friends he has in this world. It was especially delightful to find a little sympathetic public, whose taste these papers suited; and to which they have not been devoid of profit and comfort. Nor was it without a certain subdued exultation that a quiet Scotch minister learned that away across the ocean he had found an audience as large and sympathetic as in his own country; and a kind appreciation by the organs of criticism there, which he could not read without much emotion. Of course, if I had fancied myself a great genius, it would have seemed nothing strange that the thoughts I had written down in my little study in the country manse, should be read by many fellow-creatures four thousand miles off. But then I knew I was not a great genius: and so I felt it at once a great pleasure and a great surprise. My heart smote me when I thought of some flippant words of depreciation which these essays have contained concerning our American brothers.  They are the last this hand shall ever write: and I never will forget how simple thoughts, only sincere and not unconsidered, found their way to hearts, kindly Scotch and English yet, though beating on the farther side of the Great Atlantic.

After all, a clergyman’s great enjoyment is in his duty: and I think that, unless he be crushed down by a parish of utter misery and destitution, in which all he can do is like a drop in the ocean (as that great and good man Dr. Guthrie tells us he was), the town is to the clergyman better than the country. The crowded city, when all is said, contains the best of the race. Your mind is stirred up there, to do what you could not have done elsewhere. The best of your energy and ability is brought out by the never-ceasing spur.

Yet you will be sensible of various evils in the city clergyman’s life. One is the great evil of over-work. You are always on the stretch. You never feel that your work is overtaken. The time never comes, in which you feel that you may sit down and rest: never comes, at least, save in the autumnal holiday. It is expedient that a city clergyman should have his mind well stored before going to his charge: for there he will find a perpetual drain upon his mind, and very little time for refilling it by general reading. To prepare two sermons a week, or even one sermon a week, for an educated congregation (or indeed for any congregation), implies no small sustained effort. It is not so very hard to write one sermon in one week; but is very hard to write thirty sermons in thirty successive weeks. You know how five miles in five hours are nothing: but a thousand miles in a thousand hours are killing. But every one knows that the preparation for the pulpit is the least part of a town clergyman’s work. You have many sick to visit regularly: many frail and old people who cannot come to church. You have schools, classes, missions. And there is the constant effort to maintain some acquaintance with the families that attend your church, so that you and they shall not be strangers. I am persuaded that there ought to be at least two clergymen to every extensive parish. For it is not expedient that the clergy should have their minds and bodies ever on the strain, just to get through the needful work of the day. There is no opportunity, then, for the accumulation of some stock and store of thought and learning. And one important service which the clergy of a country ought to render it, is the maintenance of learning, and general culture. Indeed, a man not fairly versed in literature and science is not capable of preaching as is needful at the present day. And when always overdriven, a man is tempted to lower his standard: and instead of trying to do his work to the very best of his ability, to wish just to get decently through it. Then, as for other men, they have the great happiness of knowing when their work is done. When a lawyer has attended to his cases, he has no more to do that day. So when the doctor has visited his patients.  But to clerical work there is no limit. Your work is to do all the good you can. There is the parish: there is the population: and the uneasy conscience is always suggesting this and that new scheme of benevolent exertion. The only limit to the clergyman’s duty is his strength: and very often that limit is outrun. Oh that one could wisely fix what one may safely and rightly do; and then resolutely determine not to attempt any more! But who can do that? If your heart be in your work, you are every now and then knocking yourself up. And you cannot help it. You advise your friends prudently against overwork; and then you go and work till you drop.

And a further evil of the town parish is, that a great part of your work is done by the utmost stretch of body and mind. Much of it is work of that nature, that when you are not actually doing it, you wonder how you can do it at all. When you think of it, it is a very great trial and effort to preach each Sunday to a thousand or fifteen hundred human beings. And by longer experience, and that humbler self-estimate which longer experience brings, the trial is ever becoming greater. It is the utmost strain of human energy, to do that duty fittingly. You know how easily some men go through their work. It is constant and protracted; but not a very great strain at any one time: there is no overwhelming nervous tension.  I suppose even the Chief Justice, or the Lord Chancellor, when in the morning he walks into Court and takes his seat on the bench, does so without a trace of nervous tremor. He is thoroughly cool.  He has a perfect conviction that he is equal to his work; that he is master of it. But preaching is to many men an unceasing nervous excitement.  There is great wear in it. And this is so, I am persuaded, even with the most eminent men. Preaching is a thing by itself. When you properly reflect upon it, it is very solemn, responsible, and awful work. Not long since, I heard the Bishop of Oxford preach to a very great congregation. I was sitting very near him, and watched him with the professional interest. I am much mistaken if that great man was not as nervous as a young parson, preaching for the first time.  Pie had a number of little things in the pulpit to look after: his cap, gloves, handkerchief, sermon-case:

I remember the nervous way in which he was twitching them about, and arranging them. No doubt that tremor wore off when he began to speak; and he gave a most admirable sermon. Still, the strain had been there, and had been felt. And I do not think that the like can recur week by week, without considerable wear of the principle of life within. Now, in preaching to a little country congregation, there is much less of that wear: to say nothing of the increased physical effort of addressing many hundreds of people, as compared with that of addressing eighty or ninety. It is quite possible that out of the many hundreds, there may not be very many individuals of whom, intellectually, you stand in very overwhelming awe: and the height of a crowd of a thousand people is no more than the height of the tallest man in it. Still, there is always something very imposing and awe-striking in the presence of a multitude of human beings.

And yet, if you have physical strength equal to your work, I do not think that for all the nervous anxiety which attends your charge, or for all its constant pressure, you would ever wish to leave it.  There is a happiness in such sacred duty which only those who have experienced it know. And without (so far as you are aware) a shade of self-conceit, but in entire humility and deep thankfulness, you will rejoice that God makes you the means of comfort and advantage to many of your fellow-men. It is a delightful thing to think that you are of use: and, whether in town or country, the diligent clergyman may always hope that he is so, less or more.

This is taken from Recreations of a Country Parson.