The playing card manufacturing company, Ferdinand Piatnik & Sons, goes back to a card painting business that was founded by Anton Moser around 1824. In 1843, after Moser's death, the business was taken over by Ferdinand Piatnik, who worked in the company and who married Moser's widow. In 1882, Ferdinand's three sons, Ferdinand, Adolf and Rudolf, joined the business, known from then onwards as FERD. PIATNIK & SONS. In the course of the 19th century what used to be a traditional crafts shop gradually became an industrial enterprise.

For the past 175 years the company has been run by members of the Piatnik family.

Efforts to expand led to the foundation of several production sites and a paper mill in the former provinces of the Austro-Hungarian Empire. However, these were lost after the two World Wars. In the 1950's Piatnik started exporting to other European countries and later also overseas.

From 1950 onwards the Piatnik product range has been continuously increased so that today it includes games and puzzles. Each year, about 25 million playing cards, one million puzzles and one million games are sold in over 60 countries. 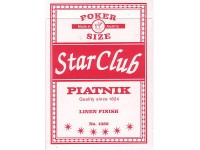