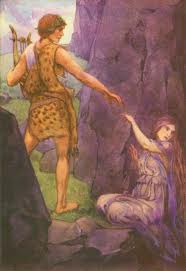 We have seen that the vampires never speak of the other world, nor ask for either masses or prayers, nor give any warning to the living to lead them to correct their morals, or bring them to a better life. It is surely very prejudicial to the reality of their return from the other world; but their silence on that head may favor the opinion which supposes that they are not really dead.

It is true that we do not read either that Lazarus, resuscitated by Jesus Christ, nor the son of the widow of Nain, nor that of the woman of Shunam, brought to life by Elisha, nor that Israelite who came to life by simply touching the body of the same prophet Elisha, after their resurrection revealed anything to mankind of the state of souls in the other world.

But we see in the Gospel that the bad rich man, having begged of Abraham to permit him to send some one to this world to warn his brethren to lead a better life, and take care not to fall into the unhappy condition in which he found himself, was answered, "They have the law and the prophets, they can listen to them and follow their instructions." And as the rich man persisted, saying—"If some one went to them from the other world, they would be more impressed," Abraham replied, "If they will not hear Moses and the prophets, neither will they attend the more though one should go to them from the dead." The dead man resuscitated by St. Stanislaus replied in the same manner to those who asked him to give them news of the other world—"You have the law, the prophets, and the Gospel—hear them!"

The deceased Pagans who have returned to life, and some Christians who have likewise returned to the world by a kind of resurrection, and who have seen what passed beyond the bounds of this world, have not kept silence on the subject. They have related at length what they saw and heard on leaving their bodies.

We have already touched upon the story of a man named Eros, of the country of Pamphilia, who, having been wounded in battle, was found ten days after amongst the dead. They carried him senseless and motionless into the house. Two days afterwards, when they were about to place him on the funeral pile to burn his body, he revived, began to speak, and to relate in what manner people were lodged after their death, and how the good were rewarded and the wicked punished and tormented.

He said that his soul, being separated from his body, went with a large company to a very agreeable place, where they saw as it were two great openings, which gave entrance to those who came from earth, and two others to go to heaven. He saw at this same place judges who examined those arrived from this world, and sent up to the right those who had lived well, and sent down to the left those who had been guilty of crimes. Each of them bore upon his back a label on which was written what he had done well or ill, the reason of his condemnation or his absolution.

When it came to the turn of Eros, the judges told him that he must return to earth, to announce to men what passed in the other world, and that he must well observe everything, in order to be able to render a faithful account to the living. Thus he witnessed the miserable state of the wicked, which was to last a thousand years, and the delights enjoyed by the just; that both the good and the bad received the reward or the punishment of their good or bad deeds, ten times greater than the measure of their crimes or of all their virtues.

He remarked amongst other things, that the judges inquired where was a certain man named Andæus, celebrated in all Pamphylia for his crimes and tyranny. They were answered that he was not yet come, and that he would not be there; in fact, having presented himself with much trouble, and by making great efforts, at the grand opening before mentioned, he was repulsed and sent back to go below with other scoundrels like himself, whom they tortured in a thousand different ways, and who were always violently repulsed, whenever they tried to reascend.

He saw, moreover, the three Fates, daughters of Necessity or Destiny. These are, Lachesis, Clotho, and Atropos. Lachesis announced the past, Clotho the present, and Atropos the future. The souls were obliged to appear before these three goddesses. Lachesis cast the lots upwards, and every soul laid hold of the one which it could reach; which, however, did not prevent them still from sometimes missing the kind of life which was most conformable to justice and reason.

Eros added that he had remarked some of the souls who sought to enter into animals; for instance, Orpheus, from hatred to the female sex, who had killed him (by tearing him to pieces), entered into a swan, and Thamaris into a nightingale. Ajax, the son of Telamon, chose the body of a lion, from detestation of the injustice of the Greeks, who had refused to let him have the arms of Hector, which he asserted were his due. Agamemnon, grieved at the crosses he had endured in this life, chose the form of the eagle. Atalanta chose the life of the athletics, delighted with the honors heaped upon them. Thersites, the ugliest of mortals, chose the form of an ape. Ulysses, weary of the miseries he had suffered upon earth, asked to live quietly as a private man. He had some trouble to find a lot for that kind of life; but he found it at last thrown down on the ground and neglected, and he joyfully snatched it up.

Eros affirmed also that the souls of some animals entered into the bodies of men; and by the contrary rule, the souls of the wicked took possession of savage and cruel beasts, and the souls of just men of those animals which are gentle, tame, and domestic.

After these various metempsychoses, Lachesis gave to each his guardian or defender, who guided and guarded him during the course of his life. Eros was then led to the river of oblivion (Lethe), which takes away all memory of the past, but he was prevented from drinking of its water. Lastly, he said he could not tell how he came back to life.

Plato, after having related this fable, as he terms it, or this apologue, concludes from it that the soul is immortal, and that to gain a blessed life we must live uprightly, which will lead us to heaven, where we shall enjoy that beatitude of a thousand years which is promised us.

We see by this, 1. That a man may live a good while without eating or breathing, or giving any sign or life. 2. That the Greeks believed in the metempsychosis, in a state of beatitude for the just, and pains of a thousand years duration for the wicked. 3. That destiny does not hinder a man from doing either good or evil. 4. That he had a genius, or an angel, who guided and protected him. They believed in judgment after death, and that the souls of the just were received into what they called the Elysian Fields.