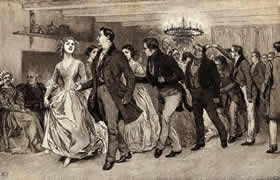 Women, particularly women a little on the decline, are those who make the reputation of a young man. When the luster of their distinction begins to fade, a slight feeling of less wonted leisure, perhaps a little spite, makes them observe attentively those who surround them. Eager to gain new admirers, they encourage the first steps of a debutant in the career of society, and exert themselves to fit him to do honor to their patronage.

A young man, therefore, in entering the world, cannot be too attentive to conciliate the goodwill of women. Their approbation and support will serve him instead of a thousand good qualities. Their judgment dispenses with fortune, talent, and even intelligence. “Les hommes font les lois: les femmes font les reputations.”

The desire of pleasing is, of course, the basis of social connection. Persons who enter society with the intention of producing an effect, and of being distinguished, however clever they may be, are never agreeable. They are always tiresome, and often ridiculous. Persons, who enter life with such pretensions, have no opportunity for improving themselves and profiting by experience. They are not in a proper state to observe: indeed, they look only for the effect which they produce, and with that they are not often gratified. They thrust themselves into all conversations, indulge in continual anecdotes, which are varied only by dull disquisitions, listen to others with impatience and heedlessness, and are angry that they seem to be attending to themselves. Such men go through scenes of pleasure, enjoying nothing. They are equally disagreeable to themselves and others. Young men should, therefore, content themselves with being natural. Let them present themselves with a modest assurance: let them observe, hear, and examine, and before long they will rival their models.

The conversation of those women who are not the most lavishly supplied with personal beauty, will be of the most advantage to the young aspirant. Such persons have cultivated their manners and conversation more than those who can rely upon their natural endowments. The absence of pride and pretension has improved their good nature and their affability. They are not too much occupied in contemplating their own charms, to be disposed to indulge in gentle criticism on others. One acquires from them an elegance in one’s manners as well as one’s expressions. Their kindness pardons every error, and to instruct or reprove, their acts are so delicate that the lesson which they give, always without offending, is sure to be profitable, though it may be often unperceived.

Women observe all the delicacies of propriety in manners, and all the shades of impropriety, much better than men; not only because they attend to them earlier and longer, but because their perceptions are more refined than those of the other sex, who are habitually employed about greater things. Women divine, rather than arrive at, proper conclusions.

The whims and caprices of women in society should of course be tolerated by men, who themselves require toleration for greater inconveniences. But this must not be carried too far. There are certain limits to empire which, if they themselves forget, should be pointed out to them with delicacy and politeness. You should be the slave of women, but not of all their fancies.

Compliment is the language of intercourse from men to women. But be careful to avoid elaborate and common-place forms of gallant speech. Do not strive to make those long eulogies on a woman, which have the regularity and nice dependency of a proposition in Euclid, and might be fittingly concluded by Q. E. D. Do not be always undervaluing her rival in a woman’s presence, nor mistaking a woman’s daughter for her sister. These antiquated and exploded attempts denote a person who has learned the world more from books than men.

The quality which a young man should most affect in intercourse with gentlemen, is a decent modesty: but he must avoid all bashfulness or timidity. His flights must not go too far; but, so far as they go, let them be marked by perfect assurance.

Among persons who are much your seniors behave with the utmost respectful deference. As they find themselves sliding out of importance they may be easily conciliated by a little respect.

By far the most important thing to be attended to, is ease of manner. Grace may be added afterwards, or be omitted altogether: it is of much less moment than is commonly believed. Perfect propriety and entire ease are sufficient qualifications for standing in society, and abundant prerequisites for distinction.

There is the most delicate shade of difference between civility and intrusiveness, familiarity and common-place, pleasantry and sharpness, the natural and the rude, gaiety and carelessness; hence the inconveniences of society, and the errors of its members. To define well in conduct these distinctions, is the great art of a man of the world. It is easy to know what to do; the difficulty is to know what to avoid.

Long usage—a sort of moral magnetism, a tact acquired by frequent and long associating with others—alone give those qualities which keep one always from error, and entitle him to the name of a thorough gentleman.

A young man upon first entering into society should select those persons who are most celebrated for the propriety and elegance of their manners. He should frequent their company and imitate their conduct. There is a disposition inherent, in all, which has been noticed by Horace and by Dr. Johnson, to imitate faults, because they are more readily observed and more easily followed. There are, also, many foibles of manner and many refinements of affectation, which sit agreeably upon one man, which if adopted by another would become unpleasant. There are even some excellences of deportment which would not suit another whose character is different. For successful imitation in anything, good sense is indispensable. It is requisite correctly to appreciate the natural differences between your model and yourself, and to introduce such modifications in the copy as may be consistent with it.
Let not any man imagine, that he shall easily acquire these qualities which will constitute him a gentleman. It is necessary not only to exert the highest degree of art, but to attain also that higher accomplishment of concealing art. The serene and elevated dignity which mark that character, are the result of untiring and arduous effort. After the sculpture has attained the shape of propriety, it remains to smooth off all the marks of the chisel. “A gentleman,” says a celebrated French author, “is one who has reflected deeply upon all the obligations which belong to his station, and who has applied himself ardently to fulfill them with grace.”

Polite without importunity, gallant without being offensive, attentive to the comfort of all; employing a well-regulated kindness, witty at the proper times, discreet, indulgent, generous, he exercises, in his sphere, a high degree of moral authority; he it is, and he alone, that one should imitate.

This is taken from The Laws of Etiquette.